The Power of Being Specific

I was reading a story recently that made a example on the power of being specific.

——————————————-
A well-known comic was planning a tour at several clubs in New York City.  He had prepared for his show as he usually did; rehearsing his timing, the visual cues, and intonations of his voice.  From all expectations, this should be an easy tour with great results.

His first several nights were great – the crowds were laughing, enjoying themselves tremendously, and the club owners were grateful.  He got on stage for another event and everything changed. Every joke fell flat. The punchlines missed. The crowd just stared at him with no emotion or laughter.  They were absolutely dead-panned and bored.  After a dreadful set, the comic comes off the stage completely deflated.

There was no explanation that he could muster. Without a rational answer, he began to question his ability and purpose. Was he done? Had he ‘lost it’ and needed to find another career?  What was he to do now? Despair set in pretty quickly and his feelings of defeat were overwhelming.

In that moment, the club owner came running in and profusely apologized.  He had just learned that the entire audience was a tour group from Italy, none of whom spoke English.  They didn’t respond to the jokes because they couldn’t understand a single word he said.
——————————————

Obviously this poor comic had come into a situation where he was entirely unable to be successful.  With the cards stacked against him, what could he have done?  This story resonates with a lot of us because we’ve felt that defeat of completely missing a mark.  If you’ve ever tried to sell something, you’re probably very aware of this feeling.  But the big question is – how do we avoid getting into that situation to begin with?

The purpose and power of being specific in our sales and marketing couldn’t be more clear.  Many of us know “what” we are marketing, but being specific requires us to focus on “who” we are marketing to.  We need to grow comfortable towards certain audiences that our product (or service) simply “…isn’t for you.”    We build our products for specific folks who have specific concerns or needs.   Our service isn’t for everyone – it’s for some.  Our product isn’t a commodity – it’s designed to solve real problems for key audiences.   We built this specifically for you to help you and serve you. 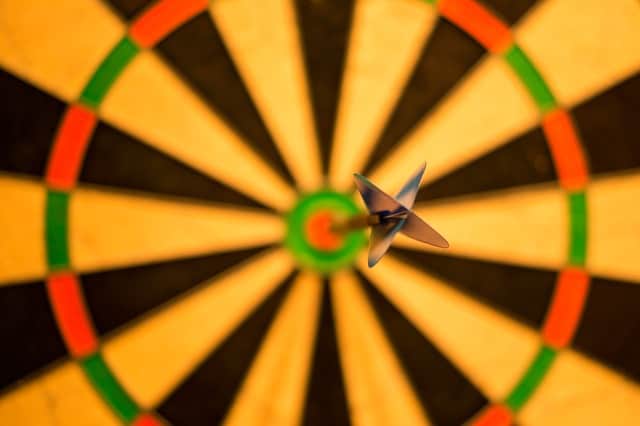 In our Two Twelve networking environment, we regularly seek referrals to help grow our business.  We may often hear our teammates explain that they’re looking for “….anyone who you know” or “…contacts you have.”  Rather than narrowing into a specific type of referral, they’re casting a broad net in hopes of literally catching anything.  Being so undefined and unfocused leaves us confused. Why ask for a referral to the whole world?  When you ask for “anyone” you’re most likely to get no one.

Being specific in our referral requests does something particularly powerful, though. It focuses on relationships.  When we ask our teammates for a referral to “Bob Snyder of Bob’s Auto Glass” or “Susan Barnes of Tri-Global Capital”, we’re looking for personal connections that are based on existing relationships. The value of that relationship is the point of the referral!  These are infinitely more powerful connections with much greater chance for success.

For B2B markets, it can be easy to be this specific.  If you’re selling a broad consumer-based service (like mortgage lending, landscaping, or financial services) you can still be specific about your audience.  Maybe you’re looking for people who have been in their homes for more than 5 years in this particular neighborhood. Perhaps you want to find homeowners who have recently moved in and are in need of landscaping services.  Maybe your financial services are targeting people who are ready to retire in the next 5 years and who are empty-nesters.  Anyone can focus their referral requests.

As we embark on a new year, help yourself and your team by learning the power to be specific.  Come to your meeting asking for targeted audiences by name if possible.  At least focus on age, geography, phase of life, buying habits, or some other demonstrable point. You’ll soon find that people perk up when they hear you ask for such targeted referrals: They know lots of people who fit these focused groups and it becomes much easier for your team to see potential referrals for you.

Learn the power of being specific and you can change your networking success!